In May, 1972, the Eternal Flame was dedicated to La Palma’s fallen citizens as part of La Palma’s long standing commitment to honor its veterans.

The second person to be memorialized on the Eternal Flame was Chief Master Sergeant Charles R. Fellenz, whose name was added in 1991. On November 24, 1969 Fellenz’s C130A encountered antiaircraft fire from the ground; while turning to avoid the fire, the plane was hit and crashed in Laos, Vietnam. Fellenz was declared Missing in Action until October 2, 1995, at which time he was declared Killed in Action. 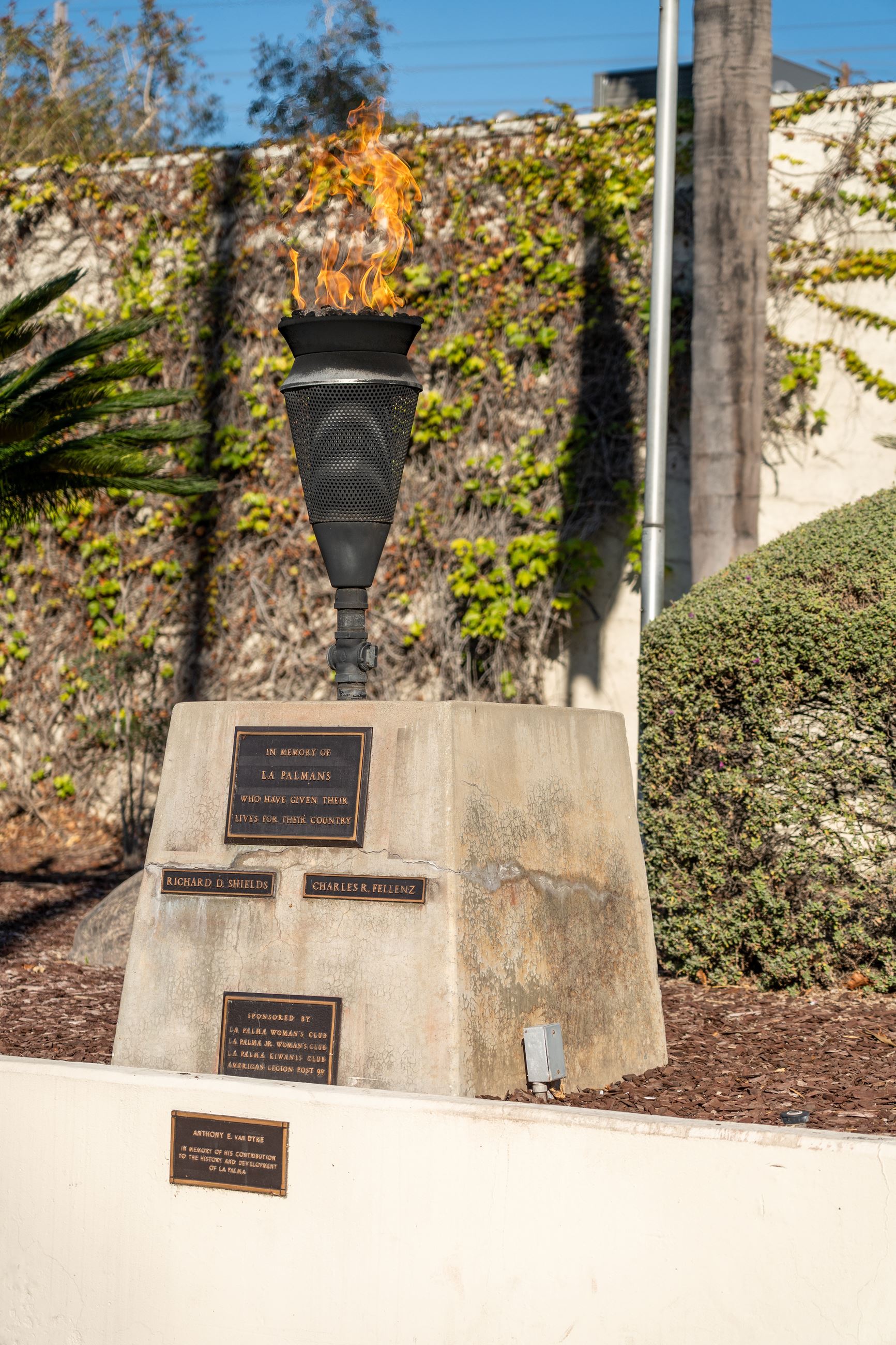 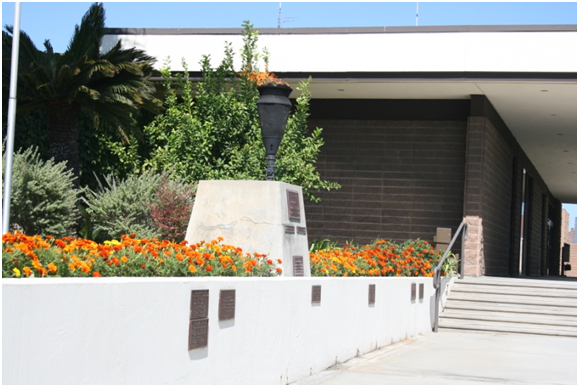 In 1991, the Eternal Flame Memorial was expanded to commemorate citizens and employees who lost their lives while engaged in acts of bravery or while performing official duties as employees of the City. Their names have been added to plaques that hang on the Memorial Wall, and are unveiled at the City’s annual Memorial Day Ceremony.

In 2000, Wallace E Davis’ Memorial Plaque was added to the Memory Garden Wall. Wallace E Davis started his career as a La Palma Police Officer and served the City for 16 years. From 1995-2000, he served as a Deputy in the Clallam County Sheriff’s Department in Washington. In August of 2000, he was called to a domestic disturbance call where he was shot and killed.

In 2006, Jack de Vries’ Memorial Plaque was placed on the Memory Garden Wall. Jack de Vries was Dairyland’s first mayor in 1955, which he won by receiving votes from 59 of the 92 registered voters of Dairyland (later to be renamed La Palma). Jack de Vries was born in Holland and later became a second-generation dairyman.

In 1985, Anthony “Tony” Van Dyke’s Memorial Plaque was placed on the Memory Garden Wall. Anthony Van Dyke served on the City Council beginning in 1978 and was sworn in as Mayor on November 16, 1984. That evening, at the conclusion of his first meeting as Mayor, he suffered a fatal heart attack.

On September 11, 2002, a plaque was added to the Memory Garden Wall to honor and commemorate all public safety heroes killed on September 11, 2001. The City continues to pay tribute to all the men and women who lost their lives on 9/11 at the City’s annual Memorial Day Ceremony.

At the 2018 Memorial Day Ceremony, the City of La Palma added a plaque in memory of one of its own, Brian Fraser, who lost his life at the Route 91 Harvest Country Music Festival shooting in Las Vegas on October 1, 2017.

From the dedication of the Eternal Flame in 1972 until 1989, the area was maintained by the La Palma Women’s Club. The Memory Garden is now maintained by City employees.

On July 4, 1972, the La Palma Junior Woman’s Club presented the POW/MIA flag to Mayor Edward Byrne. The flag was presented in honor of Charles Fellenz, who, at the time, was Missing in Action. The flag was designed to fly each day until all POW and MIA men and women are returned home. It was a unique gift that the givers hoped the need would be short lived. Unfortunately, the flag is still being flown today. 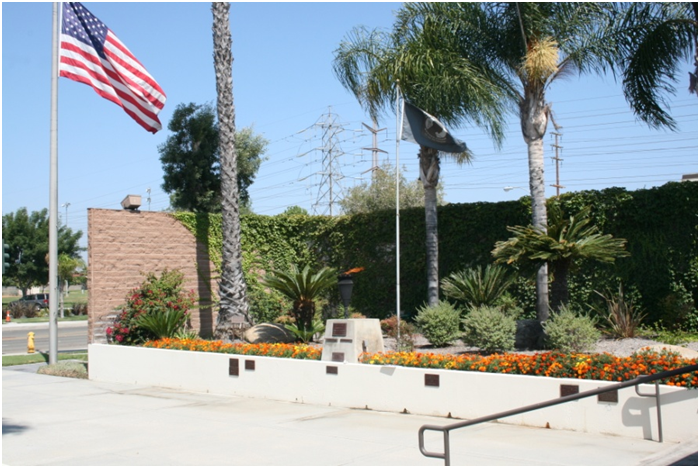 In March of 1973, a “Freedom Tree” was planted honoring Staff Sergeant Roger Hallberg and all other Prisoners of War and those Missing in Action. In 2008, Staff Sergeant Hallberg’s mother was presented the Silver Star for her son’s valor in war. Today, he is still listed as Missing in Action. The original Freedom Tree was blown over in high winds and, unfortunately, did not survive. “Freedom Tree II” was planted in its place in May, 1992.

In 2009, the City established a Community Commemorative Area to honor those who made outstanding and significant contributions to the City during their lifetimes. The City Council wanted to honor, in a permanent way, those residents and employees who have given their lives and brought honor to the City through public service. The Community Commemorative Area surrounds the City’s flag pole that sits to the west of the Memory Wall, Garden, and Eternal Flame.

The Community Commemorative Area was created in memory of Duane Schuster, who set the bar high for future nominees. Duane unselfishly made tangible contributions to La Palma by creating and enhancing a strong sense of community which has continued to transcend over time. Duane Schuster was elected to the La Palma City Council in 1992 and served as Mayor in 1996. He received the Cypress College Americana Award, KNX Radio’s Citizen of the Year, Recreation and Community Service Volunteer of the Year Award, Lyons Club Merit Foundation Vision Award, and many more honoring his unwavering commitment to the community. He served the Police Department in programs such as Volunteers in Policing, Community Emergency Response Team (CERT) and helped to establish the original Police K-9 and Neighborhood Watch Programs. Duane Schuster served as President of Neighborhood Watch and the La Palma Seniors Club until he passed away in 2008.

Daniel Collins was a Veteran of the U.S. Navy Construction Battalion and served on the La Palma Homeowners Association Board from 1969-1974. He also served as a City Council Member from 1972-1976, and again from 1980-1987; and served as Mayor in 1981-1982 and 1985-1986. Daniel Collins also chaired and directed the volunteer group that constructed the Bicentennial Gazebo in Central Park and much more. Daniel Collins was instrumental in shaping La Palma into the City it is today. Daniel Collins passed away in 2007.

Orbery Duke, a Veteran of the Korean War, served the City of La Palma as a Police Lieutenant and Chief of Police from 1966-1974 and as a City Council Member from 1986-1992, serving as Mayor in 1988-1989. Orbery Duke was also active with the Boy Scouts of America Explorers, International Association of Chiefs of Police, Kiwanis Club of La Palma, North Orange County Police Academy, Orange County Chiefs of Police Association, and the West Anaheim Community Hospital Advisory Council. Orbery Duke passed away in 1998.

Glenn W Reeves, a World War II Veteran, was a resident of La Palma for 41 years. He was appointed to the City’s Finance Committee in 1993 and to the Blue Ribbon Finance Committee in 1997. Glenn Reeves worked closely with then Chief of Police Barr to develop the Senior Citizens Organizing Reciprocal Efforts (SCORE), which later became Volunteers in Policing (VIP). Mr. Reeves was the coordinator of VIP until 2004, which grew to 40 members under his guidance and continues today. Glenn W Reeves passed away in 2008.

In 2015, Henry "Hank" Frese was added to the area. Hank Frese was a Veteran of the U.S. Marine Corp where he served as a Lieutenant Colonel. In La Palma, he served on the La Palma Homeowners Association Board as president; served as a member of the Civic Center Authority; and served on the City Council from 1972-1984, and as Mayor in 1976, 1977, 1979, and 1982. He was key in the successful development of many homes in the early residential subdivisions in the community of La Palma. Hank Frese also facilitated the installation of the La Palma Intercommunity Hospital in 1972 and played a strategic role in helping to advance the large business development, now known as Centerpointe.

The City continues to commemorate the Veterans, Community Members and Staff that have given their lives to the United States, Orange County or the City of La Palma. Each year on Memorial Day, a Ceremony is held in front of the Eternal flame to honor those who have given so much.

If you know someone that you would like honor in any of these areas, please contact the City Clerk at 714-690-3330 or complete the Community Commemorative Form. 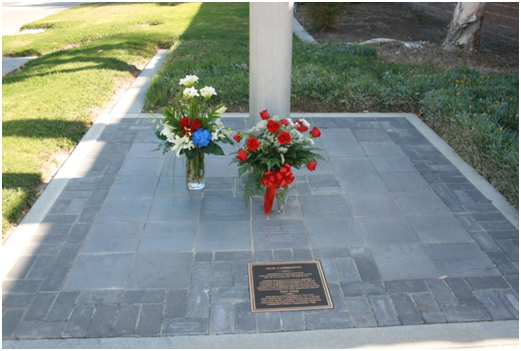